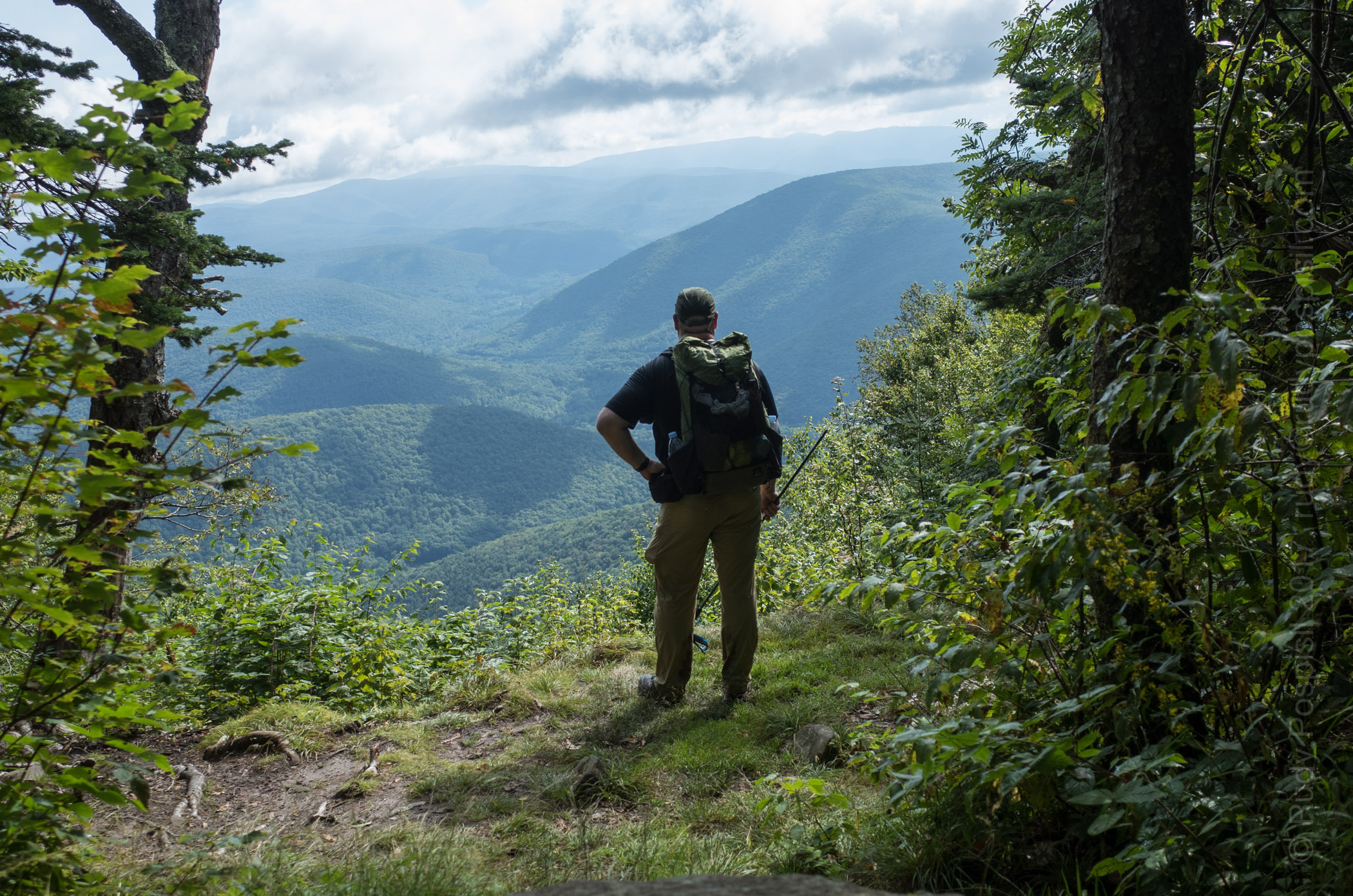 Work’s been a bit grueling. My boss offered me Friday off which I gladly accepted and turned it into a three day Catskill weekend. The plan was to ride up on Friday morning, climb up Eagle Mountain and camp out on Haynes Mountain. Saturday, I would bag Balsam and then trek back over Haynes and Eagle and camp out near the Shandaken shelter. This would give me #14 and #15 on my Catskill 3500 list. Sunday would be a nice leisurely trek back to the bike and (sniff) back to Manhattan.

The forecast called for lots of rain over the weekend. It was raining pretty hard first thing Friday morning, so I waited it out until it stopped around 9:30am. This was good timing as it got me on the road after rush hour. Anyone who’s taken 17 during rush hour knows what a horrible experience that can be.

I arrived at the empty Seager Road DEC overnight parking lot around noon. It barely sprinkled during my ride up. I was worried that I’d have to pack up my motorcycle gear wet – fortunately this wasn’t the case.

I mapped out taking the yellow-blazed Seager-Big Indian Trail (SBI) to the blue-blazed Pine Hill West Branch Trail (PHWB). The first two miles of the SBI trail are actually through private land. The owner has been gracious enough to allow hikers to pass through on the sanctioned trail but anything outside the trail is private and not to be trespassed on, nor is any camping allowed. The path crosses the Shandaken Brook a few times, so there is plenty of opportunity to fill up with cool stream water. Make sure to follow the yellow blazes and make sure to keep an eye on them. There are a lot of trails branching off but these are private jeep paths.

Once past the two mile mark, the land becomes public and is marked as such. Shortly past this is the Shandaken Shelter, poised right on the bank of the Shandaken Brook. I was actually quite surprised that the DEC has a shelter directly on the water. Anyway, be warned that this was the last water source until I returned.

From the shelter, it was a mile before hitting the junction for the blue-blazed PHWB trail. It started drizzling but nothing that warranted wearing any rain gear. I took a louie and headed north up Eagle Mountain, and the rains came. It began coming down hard. I recently purchased a Snow Peak ultralight hiking umbrella and this provided a perfect opportunity to give it a go. I don’t like hiking in rain gear because it never breathes well and it just makes me sweat, so I thought that the open air ventilation of an umbrella might do the trick. It did, however I immediately realized that using the trekking poles was no longer viable. Maybe an umbrella hat, ha ha.

Reaching the summit of Eagle Mountain was a bit steep at times but nothing outrageous. As you near the peak, there is a short herd path that heads west of the SBI trail and takes you to a large cairn, an obvious marking of the peak.

Ahh, #14. Unfortunately, there was no view whatsoever. I was planning on using the occasion to boil some water and cook up some dehydrated Chana Masala. In bear country, it’s always best to cook any food far before you reach campsite. However, I pulled a Reese Witherspoon/”Wild” – I forgot my flint (she bought the wrong fuel). So, I ate a meal bar, took my photographs of the cairn, and continued the trek north towards Balsam. This would take me over Haynes Mountain which, at 3420 feet, is too short to be a Catskill 3500er. As such, however, it’s legal to camp at the peak which was my plan.

Reaching the top of Haynes, I realized that there weren’t any good camping options. The peak was lush with vegetation, along with being riddled with rocks and fallen trees. I scurried down the north side of Haynes and soon found a very favorable bare, level spot surrounded by trees and ground covering. It was quite serene and exactly the kind of spot I love to set up in. Nature at its lushest. The rain had stopped a while ago and I was able to pitch in the dry. I had about a liter of water left but no worries as my plan was to fill up at the designated water source marked on the NY-NJ Trails map. I hung the bear bag, laid out my wet clothes, and was sawing logs by 7:00pm.

I got in a good 12 hours of slept, my body was happy. I woke up 7:00am, packed up, and headed northeast to Balsam, approximately 1.5 miles away. Nothing eventful, just a steady, rocky incline to the top. Again, no view, just a makeshift cairn. The NY-NJ Trails map showed a “starred scenic view” a bit north of the peak, so I decided to take a look. Wow! I was taken aback by the view, it was truly mesmerizing. I sat there for an hour and soaked in the view and the sunshine. I also took the opportunity to take off my shoes and socks and see if I could get them to dry out a bit.

Balsam is one of the required winter peaks, so I’m going to remember this spot and plan on setting up camp on the perch. What an amazing view to wake up to in the white of winter.

The hour passed and I strapped everything back on to begin the trek back to the Shandaken shelter. Down Balsam, up Haynes, down Haynes, up Eagle, down Eagle.

Coming down Balsam, I stopped at the designated water source to fill up but… it was nowhere to be found. There wasn’t even any evidence of one in the past. I had half a liter left. This would need to be rationed over the next 4.5 miles and it was quite humid. I’ll be fine.

As I was huffing and puffing back up Eagle, having traversed Haynes, some guy in his 50s comes flying past me. “Come on, this is an easy one.” I hate people like this. I reached the herd path to the peak and figured I’d go in for a second look. The same guy is there, typing into his cell phone. He has absolutely no sweat going on and I’m standing there drenched. Did I mention that I hate these people?

Turning around, I headed down the south side of Eagle Mountain for the last 2.1 miles to the shelter. I arrived around 3:00pm with 2-3 ounces of water left and filled up with glorious Shandaken Brook water. Finding a spot far enough from the shelter and privy, I set up for the night, and eventually dozed off while reading my Kindle. Later in the night proved to be quite eventful. I was awakened by bright LED flashlights scouring the area. There were quite a few people at the shelter and I assumed that one of them must have lost something and a few of them were looking for it. Either that or they were drunk and looking for the loo. The lights eventually subsided and I fell back to sleep, only to be awaken a couple hours later by another bright flashlight, this time someone night hiking through the trail (not a good idea). Oh, and during this time, it rained quite heavily throughout the night. I had pitched my tent underneath some overhanging foliage, so I was spared the brunt of it.

Morning came, I arose, packed out, and hit the trail by 6:30am. It was a nice easy two mile trek back to bike, albeit quite sloggy from the rain the night before. Pack up the bike and back to Manhattan with a recharged soul. Nothing is more invigorating than being off the grid and breathing in pure mountain air for a straight 48 hours. See you on #16.