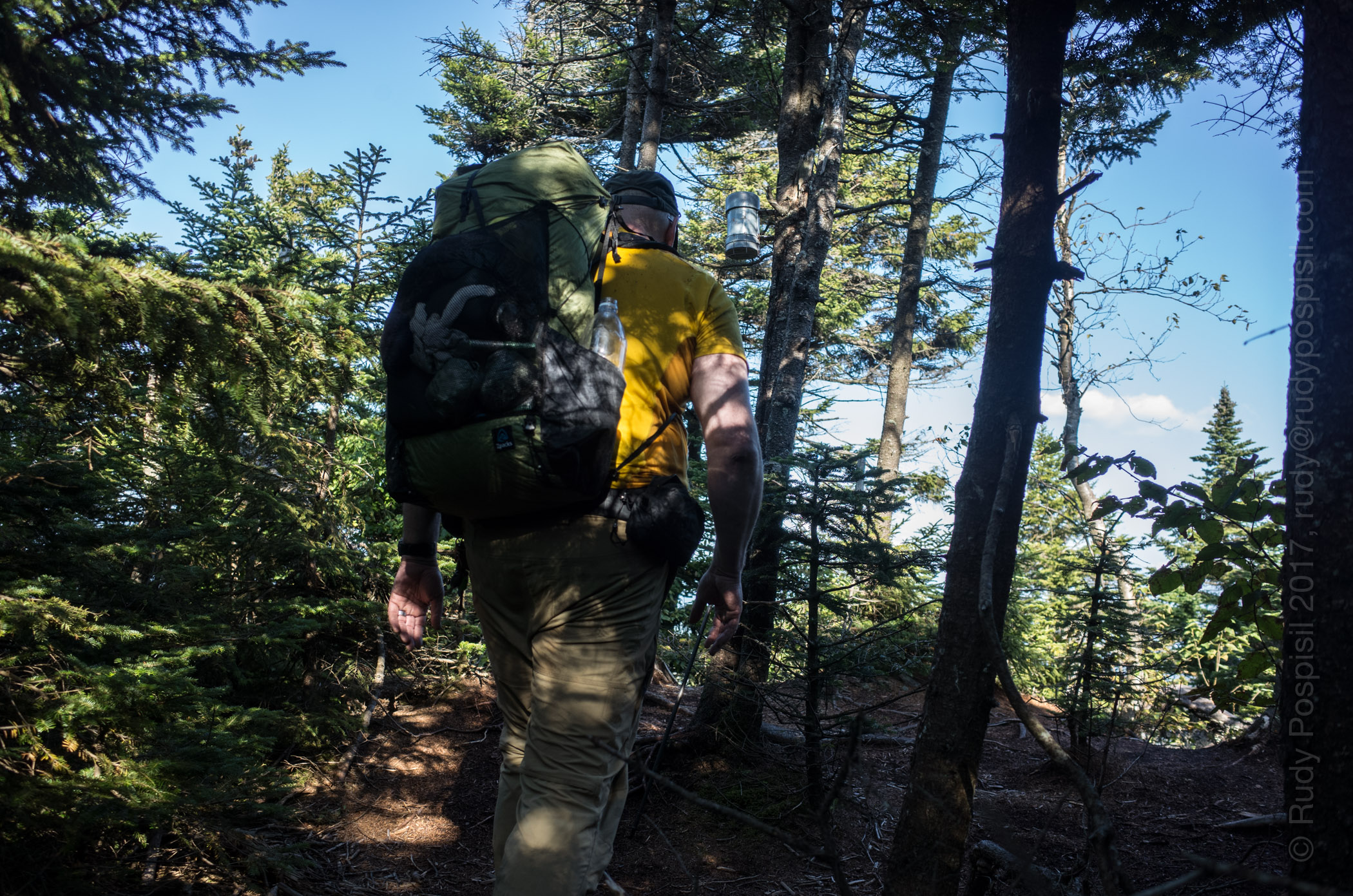 It’s Wednesday morning. I woke up to rain again. It’s a bit annoying for the simple matter that wet gear and wet clothes are no fun. I suppose that simply adds to the challenge and it has been a challenge. Three bushwhack peaks now bagged. Let me take advantage of the rain and use the time to bring you up to date.

I arrived at the DEC Denning parking lot on Saturday, September 2 around 3:00pm – later than originally planned. Speaking of plan, the plan was to backpack in along the Neversink River using the Fisherman’s Path (a herd path), camp, and fill up with water at the base of the col between Friday and Balsam Cap, bag them the following day then camp in the col of Balsam Cap and Rocky, bag Rocky and Lone the following day, camp out and finally on Wednesday, hike back to the bike and head home.

Well, it’s Wednesday morning, it’s pouring outside, and I’m sitting in a tent in between Rocky and Lone, well off plan.

I packed away my motorcycle gear, donned my backpacker persona, and headed in. The hike starts on the Trail, a path nestled within private land. It’s only 1.2 miles and extremely easy (ie, flat). At its end and where the … trailhead begins is a primitive camp. It’s also where the Fisherman’s Path begins, marked by a makeshift cairn. This is what I was looking for. The path would take me to the point where I would begin my climb up to the first of the bushwhack climbs, Friday.

I fumbled around the primitive camp site (there were three) a bit trying to orient myself and locate the path. After five-ten minutes, I happily noticed a cairn marking a well-trodden herd path heading ENE – this must be the place.

The Fisherman’s Path heads east and follows along the south side of the Neversink River and provides not only beautiful sights but also a constant source of refreshing water – no need to ration.

The path is fairly well worn but easy to lose from time to time as your attention strays. This happened to me when the path crossed the river without me realizing it and I found myself traversing up a steep slope. At this point it was nearing dusk and I needed to set up camp for the night. The steep side of a mountain wasn’t going to work. I came upon a gully and took it back down a hundred feet or so. I found a flat spot but being at the bottom of the slope that I had just climbed down and knowing that rain was in the forecast, this caused concern. I could easily find myself waking to a waterfall streaming into my tent in the middle of the night.

I looked across the Neversink and saw a few potential campsites. In fact all the while I had been hiking, I noticed many times what appeared to be a herd path along the northern shore.

Crossing the river across the myriad of stones available, I alit on the north shore. Within a few minutes I located a nice spot making sure that I was a minimum 50 paces away from the river. I set up the tent, hung the bear bags (one containing six days of food, the other my cookset), and retired. I wasn’t hungry and decided to wait and eat in the morning.

Then the rain started and except for a few momentary respites, didn’t stop for 22 hours, from approximately 7:00pm Saturday till 3:00pm Sunday. Heavy and relentless. I didn’t deem it safe for me to venture out on a bushwhack during a torrential rainstorm, not to mention how miserable I would be, so I opted to wait it out in the tent. It was boring. I slept and read but I was dry. At one point around 10:00am, the rain let up as it had done a few times before (and then promptly started up with gusto). I went to check on the bear bags. I had heard a thud during the night and was worried they had fallen. They were fine. The sky wasn’t clearing up so I expected the rain to return. I reached up to pull them down (hung via the PCT method) to grab some food bars and sure enough the rains started back up.

Not wanting to get in the tent with soaking wet clothes (call me no fun), I stopped and quickly ran back. Just as I zipped the door closed, the rains kicked into overdrive. The day officially became a zero. Not in my plans. When the downpour finally ended at 3:00pm, it was too late to pack up and head out. Sure, I could get in a few hours of travel time before having to set camp but I didn’t know where this would land me. I would be completely off trail in unknown rugged backcountry and felt safer to fresh in the morning. Additionally, the rain would have soaked in allowing for much safer footing. Looking back, I suppose I could have done a Skurka and simply battled it out, but I was on vacation and wanted to have fun and be safe. No worries, though, as you’ll see that I ended up taking this approach at a later date in the trip.

Monday arrives. I ponder whether I’ve ever slept as much in a 24 hour period. Probably only when I’ve been sick.