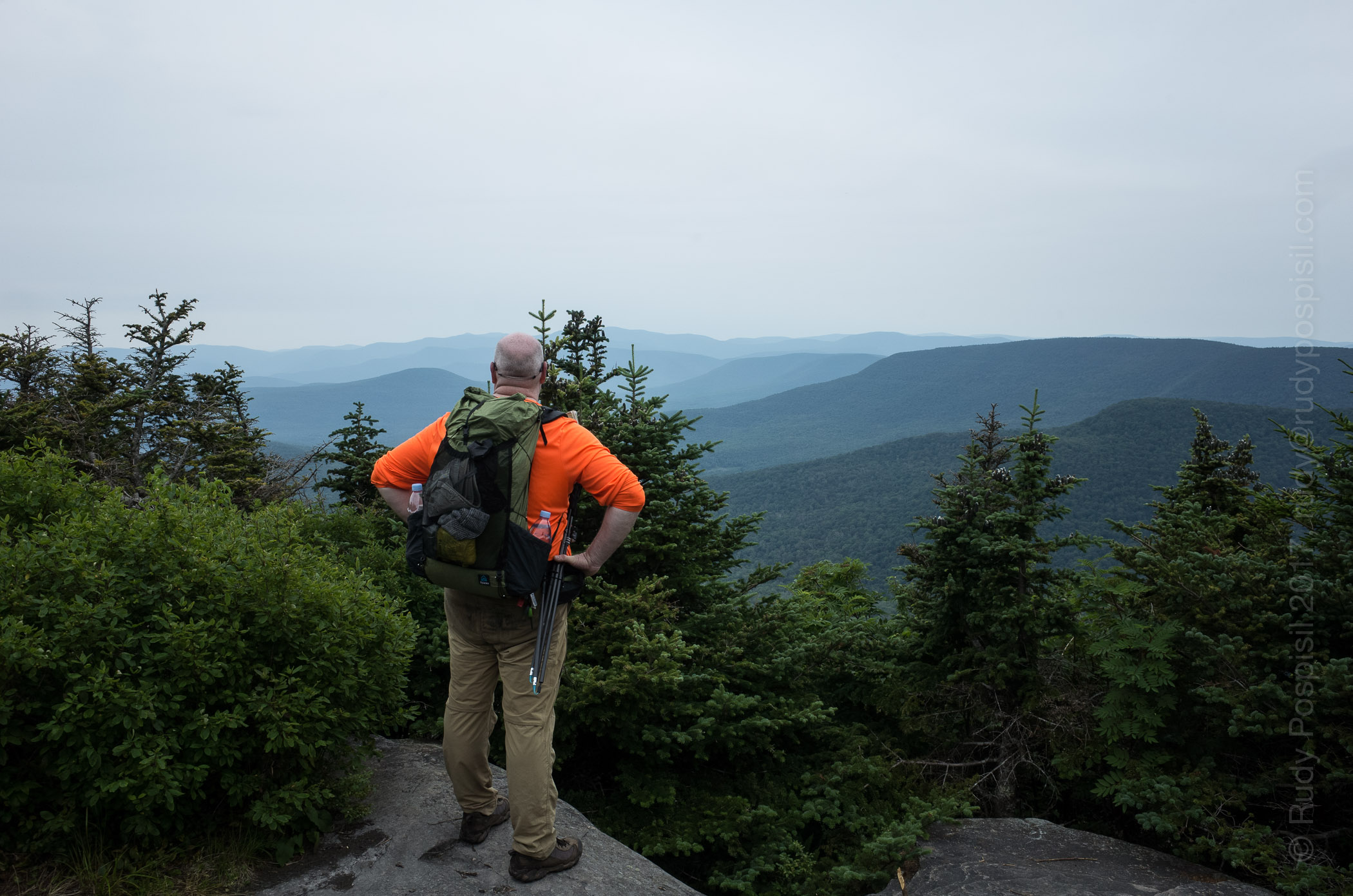 Okay. I’m on number 13, lucky 13. I (overly optimistically) thought that I could tackle Twin back in June when I climbed Indian Head but that was dumb. When I got to the trailhead of Twin after descending Indian Head, my legs were butter. Maybe next time.

Okay. It’s next time. This weekend I added Twin to my list. I left Manhattan later than planned and arrived at the Prediger Road DEC parking lot around 1:00PM, much later than I wanted. I had pulled into Tannersville to gas up and realized that I had a flat tire. I located some Fix-a-Flat and that seemed to solve the problem though I knew that I would need to replace the tire as soon as I returned home.

The initial hike on the blue blazed Jimmy Dolan Notch trail was nice and calm, ie flat. After a mile or so, that changed and the ascent became quite challenging. The funny thing, I descended this way last weekend from Indian Head and it didn’t seem so vertical. Did I mention that it was yet another humid weekend up in the Catskills? Not as bad as the previous few weekends but still extremely sweaty. Bugs, however, were much less abundant this go-around though I did get a few Zika bites.

Topping out gave way to a small clearing and gave a bit of a reprieve in terms of climbing. The Devil’s Path intersected here. Though the Jimmy Dolan Notch trail technically ended, you could continue north off trail for a 100 feet or so and get a nice view from the actual Notch.

I went right on the red blazed Devil’s Path to ascend Twin (going left would take you to Indian Head). The climb became immediately quite steep again. It was grueling all the way to the first of Twin’s two summits. This first one is the lower one, so don’t get fooled into thinking that you’ve peaked. It’s easy to think this because the view is spectacular, right up there with Giant Ledge.

Heading over to the second, and official, summit consisted of a bit of a drop and then back up but it was short and not too difficult. Again, spectacular views. At this point, I took off my pack, sat down, rested my feet, and soaked in the scenery for a good 1/2 hour. Beautiful!

Heading back down, I made a rookie mistake and headed on to Sugarloaf. It took me approximately 20 minutes for me to realize my mistake. I was having to descend down some serious verticals and trying to remember if they had been so difficult going up. I pulled out my compass (which I should have done much sooner) and saw that I was heading west when I should be going east. Oops. I had to turn around and climb up all of the rock cliffs that I had just climbed down. To add to the misery, it started sprinkling and now I’d have slippery rocks to contend with but luckily it never rained past a slight sprinkling.

Now that I was heading in the correct direction, I hoofed it all the way back down to the level portion of the Jimmy Dolan Notch trail and set up camp for the night. I pitched the tent, hung the bear bag, and promptly fell soundly asleep. I woke up once around 2:00AM and it was eerily quiet, so much so that I could hear a dead twig hitting the forest floor several hundred feet away.

The next morning, I packed up and hiked the remaining mile or so back to the DEC parking lot. The front tire of the motorcycle was holding up nicely thanks to the Fix-a-Flat. Unfortunately, riding out on the dirt road stressed the tire and it began to go flat again. I didn’t have my plug kit and nothing was open on Sunday mornings, so I made the calculated risk to ride home, checking the tire every so often. I went slow and made it home. The rim looks good. The bike is going into the shop for a new set of tires and a rim inspection. I’ll let you know how that goes.