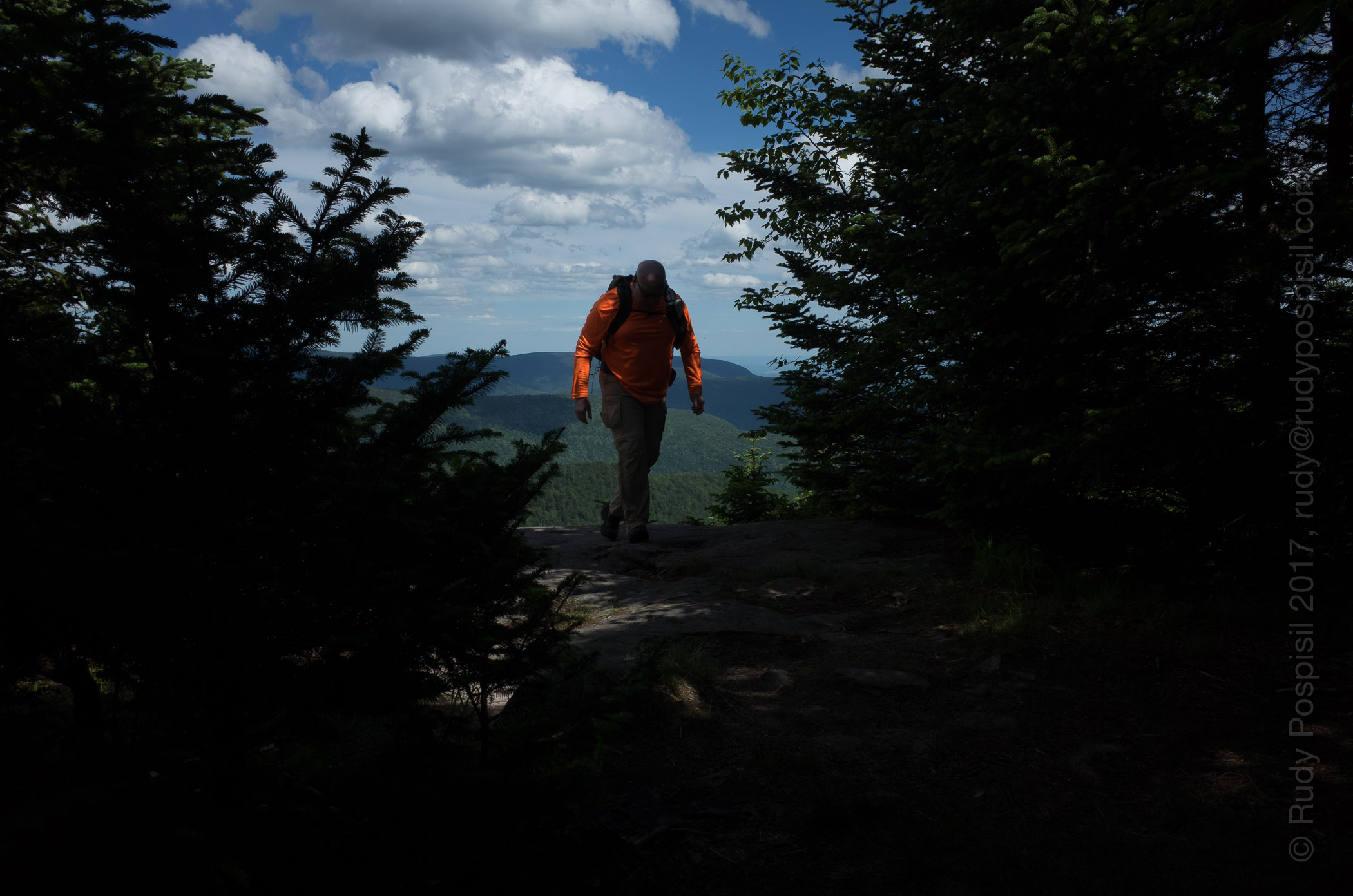 I finally broke into double digits this weekend, bagging West Kill Mountain, #10 on my Catskill 3500 list.

There was call for a lot of rain this weekend but I managed to have luck on my side. It was pouring in Manhattan early Saturday morning when I woke up. I packed up and then waited. I didn’t want to ride up in the rain and then have to pack away my riding gear wet. Around 9:00am the storm passed, I packed up the bike, and headed north, arriving at the Spruceton DEC parking lot around 12:00 noon. This trip took a bit longer because I had to travel down backroads quite a bit to get to the lot.

I arrived to an empty lot, switched clothes, and saddled up the backpack, which by the way, was a brand new ZPacks Arc Blast. I love my Osprey Exos but I’ve been reading about the Arc Blast (and the cutting edge ultralight products of Joe Valesko) for over a year now and have been wanting to try it out for myself. I was not disappointed and will post a side by side review of the Exos vs Arc Blast when I’ve spent a few more trips with it.

This trip was also the maiden voyage for a Zpacks Duplex tent which blew me away far more than the backpack. I’ve been backpacking with a Hilleberg Unna tent for over a year now but its strength isn’t as a lightweight, hot weather tent. These two new ZPacks additions have taken my base weight down almost five pounds. More to come on these two products in later posts.

The weather was gorgeous the entire day in West Kill. The hike started off on the fairly flat blue blazed Diamond Notch trail that runs along West Kill (kill being a dutch word that means creek), then veered onto the red blazed Devil’s Path which was a consistent steep climb up until a bit past the 3,500 ft marker, and then eased off for most of the rest of the way to the summit (though there were a few steep portions) with a mandatory rest stop at Buck Ridge Lookout for spectacular vistas.

Heading back down, I found some perfect forest floor at 2,400 ft to pitch tent for the night (however, the bear bagging experience was fraught with inordinate amounts of bad luck). The timing was perfect as it began to rain approximately an hour later and rained all through the night and early morning – a great test for the ZPacks Duplex tent which performed swimmingly (and I don’t mean this literally, I stayed completely dry). The rain finally stopped around 7:00am. I packed up and hiked out dry, back to the bike.

Anyway, enjoy the following photos. See you on #11.

A couple years ago, I “stumbled” upon an amazing overlook in Harriman, perfect for pitching camp and waking up to a great view. It’s provided a great, easy getaway from NYC. Here are a couple photos…

I wanted to go backpacking up in the Catskills this weekend but rain was forecasted quite a bit. I didn’t want to ride up there in the rain, change in the rain, pack up my motorcycle gear wet, and then start backpacking wet knowing that my gear would be wet the entire time. So I compromised. I had to run an errand Saturday morning and figured that I would stay in town and do a pseudo-hike by trekking on the Henry Hudson bike path from 59th street to 200th. As the crow flies, this would probably be a minimum of seven miles. With all the meandering, it was probably close to eight miles albeit with little elevation gain.

I ran my errand and then started the trek home. The rain was coming down hard. Because I was trekking urban, I took my homemade frameless Ray Jardin backpack with an umbrella tucked in the side pocket.

The second mountain this year of my Catskill 3500 journey.